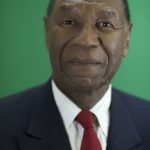 Albert N. Thompson, President Tri-State Law Enforcement Foundation.  A retired U.S. Marine, successful businessman, civic and community leader, Mr. Albert N. Thompson, was born and raised in Harlem. He rose from humble beginnings, joined the United States Marine Corps and rose to the rank of Master Sergeant, and spent 30 years of dedicated military service to his country. After a distinguished military career, Albert became an entrepreneur and partnered with Pabst beer. In 1984 he became the first African American master wholesaler and distributor, and importer for Star Beer Inc., out of Ghana, West Africa. Other business ventures include partnership with Banks Breweries of Barbados, and launching his own soda company through A & J Beverage.  Together businesses managed by Albert grossed in excess of $13 million annually.

Albert was also the President and CEO of Consolidated Beverage, Inc., a beverage wholesale firm servicing the East Coast of the US, and also served as a Senior Consultant at Herald National Bank, and Chairman of the Board of Oak LLC, a waste paper recycling company. He is the founding President of Tri-State Law Enforcement Foundation, a fraternal organization dedicated to supporting children of fallen officers in New Jersey, New York, and Connecticut, as well as law enforcement agencies at the Federal level. Albert is also currently the Honorary Director of the Public Safety Department of the City of White Plains, New York.

Albert has devoted his life to sharing his success with those less fortunate and continues to donate his time and effort by serving on the board of various not-for-profit organizations.  He serves on the Board of Directors of the Urban Resource Institute, The Service Academy Review Board Commission, New York City Partnership, Regional Plan Association, NYPD Marine Corps Association, The Harlem Dowling Society, Fellow Society, New York Urban League, and the Culinary Institute of America. His community service includes founding the Bernice Riley Thompson Scholarship Foundation. Albert’s signature work through the years includes donating toys to disadvantage youth in his community through the “Toy-for-Tots” program. Albert started the Hale House Toys–for-Tots program, served on the USMC Toys-for-Tots program. Each year needy children in over 30 institutions (hospitals, shelters, schools, churches, and community organizations) benefit from Albert’s toy donations.

Albert has been awarded the Ellis Island Medal of Honor, named an Honorary Deputy Chief of the FDNY, and is inducted into the Roman Catholic Order of the Holy Sepulcher as a Knight Commander and recently promoted to the rank of Grand Cross.